The Hirst decision of the Washington State Supreme Court has ended rural land development.  But as this article rightly states, that decision is not appropriate for the judicial branch as it flies in the face of State law.

A resident of Auburn for the past 25 years, Betsy founded Citizens Opposed to OSS Management Washington (COOMWA) in response to a public outcry to fight King County’s proposed tax on Onsite Septic Systems.   The proposed “Turd Tax” was scuttled, but State law was found to the be source of misleading legislation.   COOMWA actively blocked anti-OSS legislation in the 2017 session.

COOMWA now reaches citizens in multiple counties and has a mailing list of more than 600 OSS owners.

With a focus on this issue, Betsy was invited to join the National Board of the Citizens Alliance for Property Rights (CAPR) which represents concerns of privacy, water resources, government Takings and other critical issues facing property owners.

Betsy is retired from a career in Nonprofit Administration, having served as the Executive Director for the Arthritis Foundation, Diabetes Association and other health organizations.  She is married and has two grown children.

The Puget Sound Partnership has mandated that each County Department of Health have a plan to over-see Onsite Septic Systems.   And yet, there is no reporting on the impact of regulations on the private owners.   There are over 600,000 septic systems in the 12 counties surrounding Puget Sound.   How many families are being forced into costly replacements, sewer tie-ins, and service contracts?

Karen X.  She and her husband raised 2 children in their 1952 bungalow.  She is now an 84 year old widow, wanting to sell her home and use the equity to move closer to her daughter.  Upon pre-sale inspection, her septic system showed blockages in 2 drain pipes.  This repair would normally cost $4,000, but her system no longer meets standards and had to be totally replaced.  Not only did she have to pay for a new system, but the work ruined landscaping that was a selling point of the home.  Two sales have fallen through.  A new sale is pending.  The cost of the new system has exceeded $30,000.

Christy H.   Her septic system is over 30 years old, but continues to function perfectly.  She is on a water well and the routine tests show clean and pure water.  But she knows the time may come to get a new septic system.  She is considering her options.   A few years ago a sewer line was put down on the road in front of her house to serve a new housing development.  Connectors were not placed on the system.  A hook-up fee will be $25,000.  But the pipes are very deep and the cost to her for running a side sewer to the hook-up would be nearly $80,000.

David S ……..… we had to contract a separate company to construct the system that was designed and pre-authorized by King County.  Subsequent to having the construction authorized, we hired a company that installed the system to the specifications required by the Health Department.  Once the system was built to specifications, we spent weeks resolving issues with the Health Department before they would authorize the use of the system design that they pre-authorized.      King County Health Department formally threatened to not authorize the use of the system because the drain field was located in the proximity of an abandoned well that had been filled in with concrete.  During the process of getting our new septic system authorized for use, I had to prove that the abandoned well was filled in with concrete…………….

Kris C.  and her husband are retired, living on a fixed income.  They had a failed OSS and replaced it with a $38,000 engineered system, fully permitted by the County.  The installer gave the system a 10+ life span, but she was required to sign a monitoring contract with a specified private company to come out two times a year at the cost of $1500 per year.   Each inspection is reported to King County, including a filing fee.  A councilmember comment, “That shouldn’t have happened”.  But the contract is still in force today.

After selling a home, and registering that sale with the County, the seller was contacted by the Department of Health explaining that an audit had uncovered inconsistencies.  Arial photography revealed a patio slab had been placed partially over a septic drain field.  A fee was required for a variance.  After the sale.  No adjustment to the property.  Just money.

Steve Neugebauer, hydrogeologist and member of CAPR (Citizens Alliance for Property Rights) offers an in-depth argument against the finding of the Washington State Supreme Court which has lead to limitations on access to water on private lands.

32-pages of scientific justification for his argument and for the rights of property owners to access the water beneath their ground. 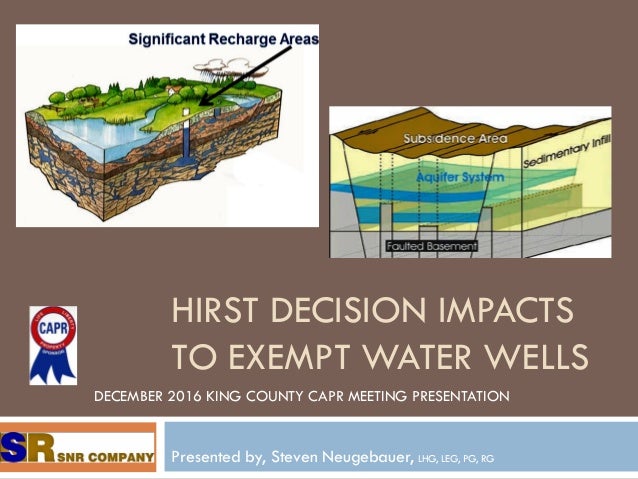